I have mentioned this organisation before. It is a very good group to get involved in, particularly for botanical artists and botanists. But have a look at the website and see for yourself  http://www.iapi.org.uk.

Yesterday, Robin and I drove up to Northampton for one of the regular meetings. They meet once every two months in different parts of the country and generally decide on a topic, get specialists in to talk to us, or as yesterday, use the very experienced members.

Last year we went to one of the meetings where Grasses was the topic. Yesterday, winter twigs was the subject. I have already described my feelings prior to and after the ‘grasses meeting’ and this time, prior to the day, I also thought winter twigs might be boring. If you have followed my blog you might remember that I was thrilled about what I learnt about grasses and yesterday was exactly the same. How could I even imagine that the subject could be boring!

I have found that when I am doing botanical painting, the result is usually better if I have studied the subject properly and not just painted it. For each of my RHS exhibits I did an awful lot of research and actually got quite hooked on finding out more about the subjects. I am also convinced that the research helped me get medals.

I am meant to be writing up notes on the meeting to get into the minutes, but I am doing this instead!

When we arrived at the meeting place, we were confronted with a table of twigs with numbers on and a sheet of paper with numbers on. The intention was to name the plants from which the twigs came and possibly include the scientific names as well. That was throwing me in at the deep end, but it wasn’t uncomfortable. We were there to learn. But I have to say that I didn’t identify many. Everyone was discussing and helping everyone else with this or that twig they thought they recognised, but couldn’t quite place. I was really amazed at some people with their wealth of knowledge whilst others were similar to me – although not quite as bad.

Roger Reynolds had put together the collection and created the list. Peter Mitchell talked to us about what we should be looking for to identify a twig.  He described the different types of tree shapes and growth habits; how the branches grew; the bark on the tree and the twigs; colour; texture; marks on the bark (also describing what they were there for); length of internodes; appearance of the terminal bud; how the buds repeated themselves round a branch; bud size and shape and a multitude of other things. So much made sense – but should I be surprised?

I think that one of the things I found most useful were the questions you need to ask yourself when faced with a unidentified twig.

Of course all the twigs in the selection were discussed in detail and we discovered what distinguished one from the other and why.

In the afternoon we had an opportunity to draw from the twig selection. I bought a couple of simple new microscopes which I intend to encourage my students to use. We used these to start some drawings and I tried to take one or two pictures of the detail from the hazel twigs, with male catkins and female buds. Unfortunately the pictures of the catkins through the microscope didn’t turn out too well, but I can vouch that the detail was very beautiful. I will be drawing or painting something from them at some point – although perhaps not just right at the minute.

Isn’t it funny how in botanical art and illustration, there is always something that is challenging you to do its portrait?

On Saturday I will be travelling up to Leicester for the day to go to an Institute for Analytical Plant Illustration (IAPI) meeting, Grasses masterclass, at the University botanical gardens. I am looking forward to this as I have only just joined the group and this is my first meeting with them.

Monday will again be a very early start to arrive at Goodnestone Park Gardens in Kent for 09:30 in the morning. I am teaching at one of the Botanical art workshops arranged by Field Breaks and hugely looking forward to it. Goodnestone Park is a lovely place to do botanical art and the gardens contain a lot of subjects! Already I know some of the students and some use watercolour and others coloured pencil. I enjoy this mix.

But I have started another picture. I am still doing the initial sketch! But the final picture will be in pen & ink. I have another two-day workshop 1-2 October which will be pen & ink. How far I will get with this picture by the start of that workshop, I don’t know – but it will be useful having something on the go.

So far I have only started sketching it. Guess what it is! 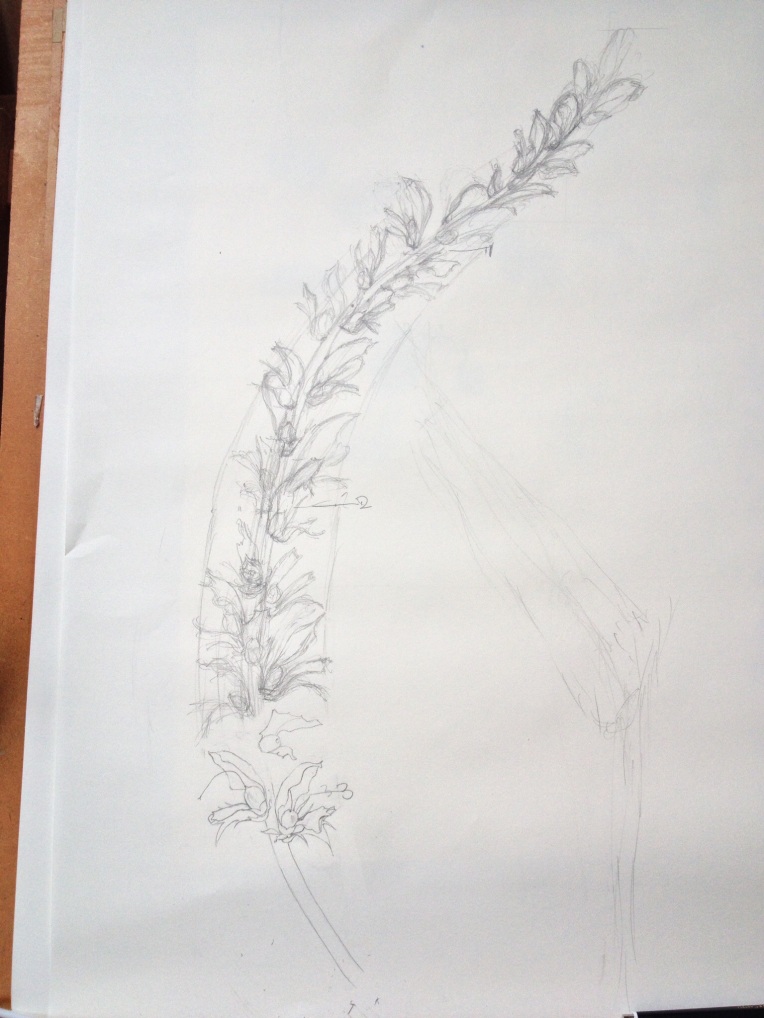 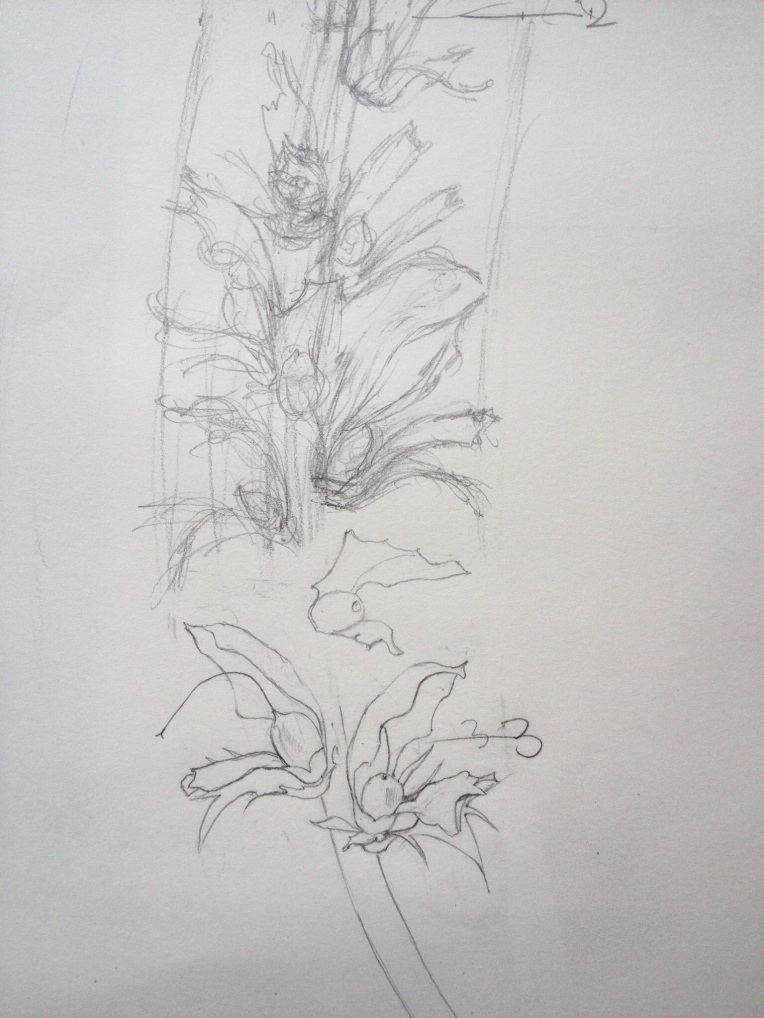