The last day of the conference with the ASBA. It is sad. I have made a lot of new friends here from all over America, Canada, the UK, Australia and South Africa. There has been such a wealth of experience here that I am tingling.

As I have been so involved with the Hunt Exhibition, I have only been able to dip in and out of the ASBA conference. But today I went to the lectures. Unfortunately, I have been unable to go on any of the workshops, but I am happy having had the opportunity to talk to so many people.

First thing this morning there was a lecture from people from the Phipps Botanic gardens. The talk was about how they are trying to bring knowledge of plants to the people. Three of the scientists gave us a small glimpse of their everyday. It was about bringing knowledge of the environment to young people who are unlikely to even get to see a big park or open space.

For example, growing veg in window boxes as they don’t have gardens. Or, how the bugs they see in between paving stones are affected by chemicals in the environment and by the vegetation growing there, however minute. We also heard about research into the impact of chemicals on fertilisation and then the bugs and bees that carry out the fertilisation process. There are plants that can remove chemicals from the soil and, then in turn the chemicals can be extracted from those plants (phytoremediation). But as everything is in an environment depending upon each other, they have to check that curbing problems in one area doesn’t create problems in another.

The last person we heard from was trying to find a cure for Parkinson’s. This involved talking to people where it is common to find plants are used as treatment and then researching the properties of those plants. Many cures for cancer have been found in this way, such as Yew for breast cancer and the early treatments of cancer with moss growing in the mountains in Norway.

My husband sneaked in on this lecture and then spent the rest of the day at the Botanical gardens.

One of the final statements was that Botany is dying. But we have only ourselves to blame for that. Apparently in ordinary biology books, one will see a picture of an insect on some plant material. The discussion about the picture is most likely to only be about the insect and not the plant or perhaps the dependence each has upon the other. Important topics.

Another lecture we had was about How to start a Florilegium. We were lucky to have four people who had been responsible for co-ordinating projects. These included the Brooklyn Botanic Garden Florilegium, the Eloise Butler Wildflower garden Florilegium in Minneapolis, the Filoli and Alcatraz Florilegiums and the Highgrove Florilegium. It is quite a job managing such important bodies of work.

I’m afraid I have no photos showing any of these Florilegia!

The last lecture I went to was with Lugene Bruno, the Curator at the Hunt. The topic was ‘Beyond Accuracy’. She was talking about the art behind the botany. It was a very interesting and encouraging talk. It also inspired some ‘warm’ discussions. What is the difference between Botanical art and Illustration. Also, how much leeway is given before it becomes Flower painting. However, there was agreement that there was room for all disciplines in appropriate circumstances.

Tonight we had the hidden bid. It is a very good way to raise money within the ASBA for projects within the organisation. Some lovely donations were made by the artists and it obviously created a lot of excitement.

To complete the days, we had a lovely dinner before going our separate ways for a while.

Before I finish off today, you may remember I me tensioned the Cathedral of Learning in Pittsburgh. This is a picture My husband took from the inside. Remember, it was built for the purpose of housing the University of Pittsburgh and for no other reason. 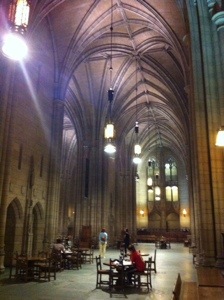